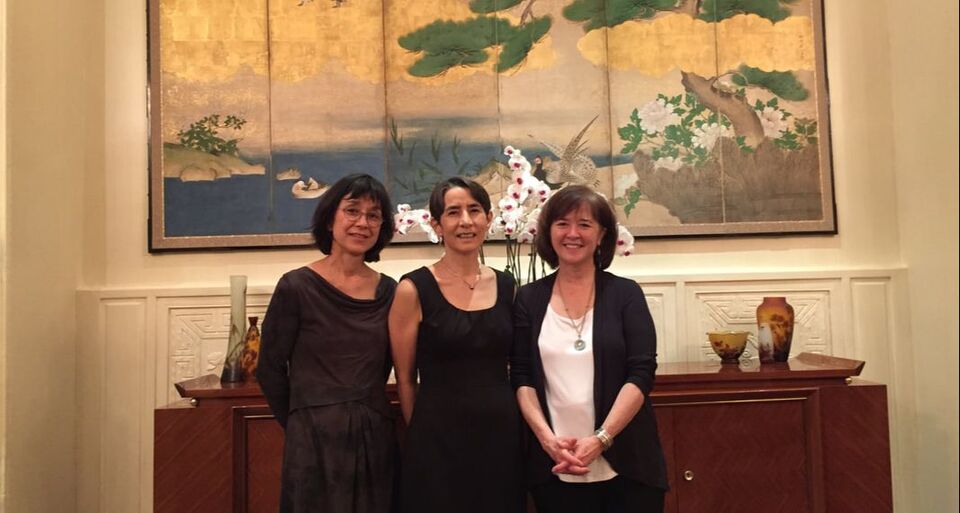 From left to right:

​Kathryn Tolbert is from Elmira, N.Y. and has worked for The Associated Press, The Boston Globe and The Washington Post as a reporter and editor. When she worked for the AP in Tokyo, and later for The Washington Post's Tokyo Bureau, she often wrote about Japanese women. The war bride story is one she has known she should tell. Taking a leave of absence from The Washington Post, she has been gathering those stories for this multi-media project.

Lucy Craft, a producer and reporter for CBS News Tokyo, hails from Washington, D.C. Curious about how her Japanese mother ended up with a Jewish guy from the Bronx, she eventually drifted to Tokyo, even settling in her mom’s old neighborhood of Suginami. Lucy used to say it was in search of roots, but working on this war bride project has convinced her it’s more about a shared DNA for somewhat reckless adventure and wanderlust.

Born on a U.S. Naval base in Yokosuka, Japan, Karen Kasmauski is the daughter of Steve, a career sailor who served in three wars, and Emiko, who still lives near the base in Norfolk, Va. Inspired by her father’s love of photography, Karen spent most of her career as a contract photographer at National Geographic, where she broke new ground covering fields from medicine to migration. Her work has taken her to every continent including Antarctica.

Robert Dohner.  Professional economist with over 25 years’ experience in U.S. Government and international agencies.  He was the U.S. Treasury Department’s representative in Japan from 1997 to 2002, and Treasury’s Deputy Assistant Secretary for Asia from 2005 to 2016.

Heather S. Foley. Worked as her husband Thomas S. Foley’s top staffer in an unpaid position for twenty-four years (1970 through 1994) when he was a Member of Congress. Before that she worked for Senator Henry M. Jackson and briefly for Congressman John Dingell. From 1997 to 2000, she lived in Japan while her husband served as U.S. Ambassador, and worked as a research assistant at the Japanese think tank Japan Research Institute (JRI). Upon her return (2001 to 2003) to the United States she worked as the chief of staff for Congressman Jim McDermott (D-Wash.) now retired. Mrs. Foley became a member of board of George Washington University in 1990, and is now retired after 25 years of service.